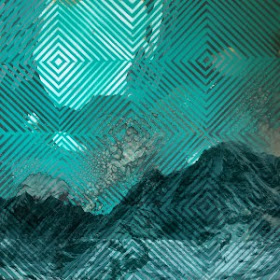 To my shame I've arrived a bit late at the Flowers Must Die party - but better late than never eh? Whilst I'm au fait with the Swedish group's earlier recordings, I missed out on the initial hullabaloo that met this release (on Rocket Recordings) but on playing catch up it became glaringly obvious that this is one Swedish group that just goes from strength to strength (unlike some others!). Sweden has a long history of top notch psych, stretching back to Baby Grandmothers, Trad Gras och Stenar and International Harvester, and 'Sista Valsen' sits well amongst those legendary names. 'Sista Valsen' sees the welcome addition of vocalist/violinist Lisa Ekelund who adds a different dimension to this recording. It has a real jam vibe to it that sees the band travel on a different trajectory to their previous outings.

Opener ‘Sista Valsen’ is a drone heavy track with some ace tribal drumming. Right from the get go Ekelund proves what an inspired addition she is to the ranks...her impassioned, gritty vocals add an element not heard before in FMD's music and the violin, amongst a dense layering of instrumentation, gives the track a touch of the exotic. ‘Taskig Stämning Annars’ is an eleven minute behemoth of a space jam...more dense layers of sound and drones lend it a real feeling of spaciousness along with an eastern motif running through. It's a real slow burner....the instrumentation is lush and some treated, mutant vocals only serve to heighten the spacey feel. ‘Kruta’ sees the tempo upped a notch or two, thudding drums and strident guitars offer a counterpoint to the two previous spacey jams. The feeling of space is still present however, some swirls and swooshes of electronica impart a cosmic element and there is the same ethnic feel thanks to some more imaginative instrumentation. It's that rhythm that gets you in the end though...it never stops throughout, driving things forward in a relentless manner. ‘Varför’ sees the atmosphere change once again, this time things are more relaxed and melodic. The strings are gentler but no less alluring and it all has more of a folky feel about it....yet another dimension to this, the most inventive of records.

The 'Sista Valsen EP' is a wondrous thing, full of imaginative playing, shifting but always welcome atmospheres and a constant imaginative approach to music making. As I mentioned, the addition of Ekelund adds a new dimension and that is not to make light of FMD's previous excursions, it's just different. I love this EP, my only regret is that I came to it late. I sincerely hope that the growth and evolution of the band that this record shows is a permanent thing...if so, the Flowers Must Die will certainly be mentioned in the same reverential tones as some of the great Swedish psych bands. 'Sista Valsen', I believe, is sold out on vinyl from the Rocket Recordings site but the download is still there. The vinyl may still be available from good stockists