Ten Of The Best: Rickard from Flowers Must Die 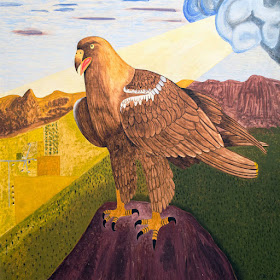 Sweden has a long and distinguished history of psychedelic music; from the late sixties/early seventies legends that are Pärson Sound, via their later incarnation Träd, Gräs och Stenar and stretching to the current crop of ace bands like Goat, Hills and Kungens Män. One of the very finest contemporary Swedish psych bands are Flowers Must Die - consistently inventive and always quality, their albums are a lysergic journey through psych history channeling the aforementioned Träd, Gräs och Stenar via Can and Amon Düül II and throwing in some modern post-punk attitude for good measure. Their last album 'Kompost' (Rocket Recordings) was a triumph and cemented their place at Psych's top table.

Good news for us lucky blighters here in the UK, the band are touring, starting this week:

(If anyone is going to the Cambridge gig...see ya there)

Anyway, to the business at hand - Rickard from the group has very kindly spared to time to put together a list of 10 of his fave records...and it's a pretty damned cool list....cheers Rickard!

"It is really hard to choose only ten records, first you start to think about the records that made most impact on you and change the way you listened to music.This would be records that I bought and listen to from early 90s to late 90s and a few into 2000. It will be a list of nostalgia where a few for sure stand the test of time, from Ministry "The mind is a terrible thing to taste", Nirvana "Nevermind" to Public Enemy "Fear of a Black Planet", The Prodigy "Music for the jilted generation" to Scott Walker´s "Tilt". Then it could be a list of records that influenced FMD and some choices I knew the rest of the band would have choose, like Black Sabbath, John Coltrane, Hawkwind, Captain Beefheart, Stereolab, PJ Harvey and Jimi Hendrix und so weiter."

"So I decided instead to quickly choose some albums/artists that have made a huge impact on me and which for sure can sum up the eclectic side of FMDs music too."

"Not really an album, in 2001 this 2cd came out with unreleased recordings between 66-68. Members later formed International Harvester, which became Harvester and finally Träd, Gräs och Stenar and where also members in Arbete och Fritid, Mecki Mark Men, Archimedes Badkar and Blå Tåget. Without this unit there will not have been any FMD or other psych-hippie-progg-drone-mantra-freakout bands coming out from Sweden! Incredible document and the best start if digging into the roots of Swedish music. Do also check out one of the best recordings done in Sweden by the band Älgarnas Trädgård and their record "Framtiden Är Ett Svävande Skepp, Förankrat I Forntiden".

"It is extremely hard to pick one Nico album, and I could have combined my love for both her and Velvet Underground by choosing the Andy Warhol album, as I think VU are responsibly for the same influence as Pärson Sound was. Where all the members did great things on the side, like Angus MacLise which have influenced me a lot when it come to create music (mostly as solo then) and then John Cale, Lou Reed, Moe Tucker and for sure Nico! What a voice, what a character and that dark, gloomy, primitive music which is at the same time so beautiful, naked and timeless."

"Well I do need to have some Can on here, and this was the first album I heard from them, think I read about them when Bobby Gillespie where talking about influences for the newly released Vanishing Point. At that time in the mid 90´s I have to depend on finding records I wanted in local stores or at record fairs, so might have taken me some time to buy my first Can record and when doing that it was no turning back. This record has it all, even if some of my favourite Can moments are on other releases, this album has a bit of everything. The primitive repetitive funk as in Pinch, the even more funkier Vitamin C to the absolute beautiful track Sing Swan Song. It also took me about 12 years or so after its purchase to understand the name and the cover, when meeting my wife with roots in Kurdistan and ate my first Bamya, have always just thought it was a made up name and didn´t look closer on the can on the cover to realize it was Okra."

"From the year I´m born, which is a good sign. From the first time I heard this I knew it was an album that will follow me through my whole life. I bought it when Blood & Fire released it as a double Cd in 1996, and I can´t say what make it so special. But it is an album I can listen to whenever, to get happy, to stay happy, being frustrated, driving a car and so on. I remember working at a shit hole of a factory sending out computer parts, it was stressful and hard work. But I had a colleague some years younger than me only listening to hip hop. We had a few cds each to play to keep us in good mood, but at the end we ended up only playing this album to the other co workers big irritation."

"Another album from me year. Its hard to choose between this and the 2nd, but this album have that instantly kick when the first seconds of Ghost Rider start. And then the most furious and vicious song EVER recorded in Frankie Teardrop. Also their music career have been following me ever since, for example I named my first label rev/vega rec."

"Since I started listen to Punk and especially the Swedish, you can not fail to notice the presence of Freddie Wadling. This guy deserves a chapter him self, but to cut it short, he was an outsider who only found him self free and in a context when singing in bands (later as solo). And this record is just a killer album combining, frustrated Post Punk in the same vein as Chrome, Joy Division and Bahaus and with two of my all time favourite tracks "Mayhem troopers" which I have ended many dj-set with (to some security guards irritation) and "The Freaks" which is a minimal piano ballad and sums up the life of Wadling who tragically died last year after some years of sickness. Footnote: a young Jean-Louis Huhta (Dungeon Acid, Skull Defekts, Lucky People Center) played in Cortex."

"Simplicity! This is the ultimate record for me from the drone-shoegaze-dreampop era. And when forming FMD they where the inspiration. I´ve had listen to MBV, JAMC, Spacemen 3 and other bands for a while, but in Sweden no one talked about Loop, then maybe in 2000/01 I went to a local charity shop as I did a few times a week looking for records. Most of the time coming out empty handed, this time they had extended the crates quiet drastically and it was more people then usually digging, I noticed a local guy(character) who run a own shop with records and bric a brac. I said hi and quickly whent to the crates one step before him as he was already holding a bunch under his arm it was no meaning going through the ones he have already dug in. I found three Loop records, "Fade Out 2x12", "The world in your eyes" and "Collision". Good catch but the story does´nt end there, the guy holding all the records started going through his catch with me, a lot standard rock but then he held Swans "Children of God" in his hand asking me if I knew anything about them, well I had to bite my tongue and he looked over the record and the cross and title and said "maybe it is some Christian rock" and I said yes probably, he put it back and milliseconds after he turned his back I picked it up. Ended up with these four records for less then £4 and a life long love for Loop!"

"I remember the video for Human Behaviour when watching MTV at a friends house, it was trippy, weird and the images probably etched more in my mind then the music, but when hearing it a few times, I couldn´t get that voice out of my head, its like it hitting a nerve in your brain at the right spot and stay there forever. I fell in love with everything she did after this, even if I haven´t run to the shops or keep track on her music, installations, movies and so on later she is always there somehow. She have done things her way and never stop to surprice you, re-inventing her self and her art. And at the same time never loose her strongest weapon, her voice, many can loose them self in technology and by trying to be one step ahead all the time, but she still feels very natural."

"A big jump and into more recent years, I would say I do listen mostly to old music. And when listening to new music it is either related to artists I booked for live shows in Sweden, where i promoted shows for many years (and still once in while) or it is friends projects or label mates or seeing something live when out playing. But I rarely buy new records. I have booked Orphan Fairytale twice in Sweden and live it is good, but damn this record is just pure joyful mindbliss! A record which just make you wanna flip it over and over again and again, four long sides, where the different tracks melt together and time stands still."

"This one stands out on my list cause it is not a release, it is a person. Behind the name is Fredrik Holm and NOS is his alias, as a graffiti artist, making backdrops to Trance parties, light shows, as a Techno producer, or a living legend. I got to know him when moving to Malmö in Sweden in 2007, a character you noticed at gigs, always in different costumes, I met him at Egyptian Lover, Front 242 or local Psychrock bands concerts. He is a driving force and a person you get inspired by if you are interested in music, lightshows, art or life. So far only two releases are out there, but they are not close to the hours/days/weeks of music that he have created, and he never record in his studio or any of his live shows, and each are unique, he never saves a pattern, it is from scratch each time. And the music could be either full on rave or playful Techno, Schulze-ish pulsating ambient to synth or drone. He is for sure the person Ive seen live the most and I was delighted to arrange his 40th birthday at my venue in Sweden. He now has a project with his girlfriend Tove Johansson called NOS++T++ who have played on nights with Föllakzoid and Robert Leiner for example."