Review: Deison & Uggeri - In The Other House 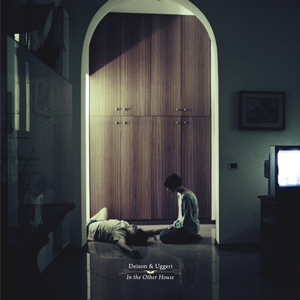 I've been travelling down the experimental path this week, thanks largely to a couple of releases from Switzerland's Old Bicycle Records. OBR specialise in cassette releases (occasionally vinyl) of experimental and concrete music and the two latest releases, although different, are both intriguing and beautiful pieces of music. First is 'In The Other House' by Deison & Uggeri.

Cristiano Deison & Matteo Uggeri between them have a rich history in experimental/abstract/ambient music; Deison has collaborated with the likes of Lasse Marhaug, Thurston Moore and KK Null whilst running Loud! records, and has since gone on to release a slew of ambient and texturally rich soundscapes. Uggeri has been active since 1996 when he played in the industrially inspired Der Einzige and has since explored dark ambient, concrete music, EBM, krautrock, electroacoustic and folk, as well as being a longterm member of Sparkle In Grey.

With 'In The Other House' they bring together their collective experience and inspirations to produce a piece of work that is darkly immersive, sometimes unsettling, but always laden with atmosphere. Although not a concept album per se, it takes as its inspiration the claustrophobia "enclosed between the narrow walls of an exceptional home....together in uncomfortable rooms which were populated by dark invisible presences. It is not the scenario of a horror movie, there is no tragedy or fear, just the knowledge that somewhere else or the escape itself may be less reassuring than one has hoped." (Press release)

Those who like a brief soundbite....imagine The Haxan Cloak soundtracking a long lost John Carpenter film and you have 'In The Other House'. As the press release states, there is no fear, but a hell of a lot of foreboding and tension. Comprised of six tracks which open with the sublimely beautiful 'Fessure (Attic And Stairs)' with its drones,wavering synths and snatches of melancholy violin and a single heavy beat that appears and disappears in the background. 'So Detached (Dining Room and Terrace) is an atmospheric exercise in drones and found sounds - bells ring in the distance and what sounds like rain, but could be a typewriter!. 'Micro Drama (Kitchen)' comprises of one long drone punctuated by a lonely piano and some effects from an imagined psychodrama. 'Stasis (Bathroom)' is a more abstract affair and is reminiscent of the early electroacoustic pioneers - discordant electronica with blasts of brass, jangling percussion and an undercurrent of static. 'Worried Stagnation (Bedroom) is another droneathon and is genuinely eerie....you expect something horrendous to jump out of the hidden recesses of the track. The album closes with 'Prelude, Largo (Stairs and Cellar)' which neatly brings the album together.....drones, snatches of harp and more eerie effects...a synthesis of the whole album into one track and reminded me of Lustmord, and that's no bad thing.....beautiful.

Some people are put of by 'experimental' music....mainly, I guess, because it does not conform to the recognised norms....verse, chorus, verse and an arrangement of musical notes that 'sounds nice'....but some prefer their listening to be challenging, and thus rewarding. To the former I would say open your mind and challenge your preconceived ideas and give 'In The Other House' a listen...it may be 'experimental' but is genuinely beautiful in places and thoroughly atmospheric throughout...and exceptionally rewarding.

'In The Other House', rather confusingly is the product of five labels: Final Muzik , Old Bicycle Records , Oak , Loud and Grey Sparkle. It is released on 1st June and is available, on a limited basis, on vinyl and CD. You can find it on the Old Bicycle Records bandcamp page.